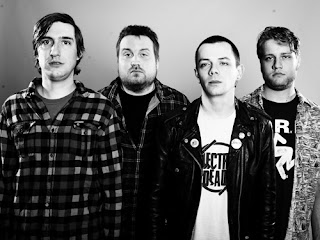 Houston (Texas / USA) has one of the most thriving scenes nowadays when it comes to hc/punk (The Secret Prostitutes, No Talk, Bloody Hammer, Crime Wave, Talk Sick Brats, ...). The Energy is a fairly new band from that same scene and they've released their second LP last year (once again on Team Science Records). A bit quicker, shorter and more to the point compared to their debut LP but no drastic changes in hindsight. The Energy is definitely a band on his own musical (rock)trip and that might be the reason why they get so often overlooked.
Here's your chance to catch up: you can stream both their records via the link below!
If you want to purchase physical copies, try Team Science Records in the US or Lammie & Don't Buy Records if you're living in Europe.