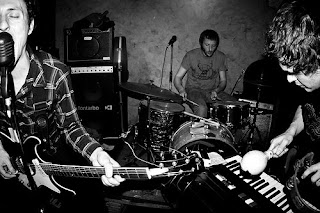 I’m posting this because this is some very cool homefront material. It’s (still) rare having great underground bands performing in Ghent so this show was very much anticipated & welcomed by us.
In January 2011, The Feeling Of Love played a free show in bar “Kinky Star” in Ghent organised by the guys from KRAAK. Their LP “Dissolve me” hadn’t been released yet but you’ll notice that most songs on TFOL’s setlist were from that album.
All of Helter Skelter were in attendance that night and liked it a lot. Thanks to the guys of “Kinky Star”, you’re now able to judge for yourself! Enjoy!